Below is a selection of teasers for past TBE News posts.  Click on the title or "read more" to view the full news article.  Use the pager at the bottom to step backward in time.

In troubled times we can turn to Jewish traditions for insight and inspiration. I want to share some thoughts in advance of this lovely holiday, drawing on teachings by three contemporary chochamot, wise women reading Ruth from a feminist perspective.

On Shavuot we read verses from Shemot, the Book of Exodus, describing Matan Torah, the Giving of Torah. It’s an epic scene with big special effects: The entire Israelite population is gathered at the foot of Mount Sinai which is covered by a thick cloud. All the people witness the thunder and lighting, and the sound of a Shofar (ram’s horn) that makes the mountain tremble! In this attention-grabbing setting, Moses climbs up the mountain and receives the stone tablets inscribed with the Aseret HaDibrot, the Ten Sayings. The whole tale has an over-the-top (of the mountain) feel! The ethical and ritual rules of the Ten Sayings are delivered in the most dramatic and memorable circumstances. The scene has been etched into the Jewish imagination for nearly 3,000 years!

But alongside this fiery tale, on Shavuot we also read a tender, domestic story: the Book of Ruth, an elegantly- crafted short novella revolving around the figures of Naomi from Bethlehem in Judah and her daughter-in-law Ruth, a native of neighboring Moab. How splendid to have a Biblical tale of such antiquity that centers on female characters!

In contrast to Mount Sinai’s issues of cosmic power and national identity, the theme of Ruth is love, especially as expressed in the Hebrew noun hesed, often translated as lovingkindness, the love-in-action. Just as we ask questions about the meaning of the texts, so did the rabbis long ago. Ruth Rabbah is a collection of Rabbinic midrashim (legends) that were composed sometime between the years 700 and 950 C.E. Rabbi Ze’eira points out that Migilat Ruth (the megillah/scroll of Ruth,) contains no discussions of purity or impurity, prohibitions or allowances. And so, he asks, “Why was it written?” And he answers: “To teach you how good is the reward for deeds of lovingkindness.” (Ruth Rabbah 2:14):

Yom HaShoah - יום השואה  - is always challenging, and especially so this year as we see a steep rise in anti-Semitism and other forms of hate across the country and the world.  The Union for Reform Judaism (URJ) recently began an historic partnership with the Anti-Defamation League (ADL) and here at Temple Beth El we have initiated an Anti-Semitism Task Force to develop and implement both reactive and proactive measures to address local problems and threats.  https://urj.org/what-we-do/social-justice/urj-adl-partnership

It’s especially painful to acknowledge that Jews are not always the victims of terror but sometimes the perpetrators. This winter the URJ joined the ADL and other Jewish organization to take a strong stance against “ongoing terrorism and political violence committed by Jewish Israeli extremists in the West Bank against Palestinians, Israeli civilians and IDF soldiers.” https://www.timesofisrael.com/adl-other-jewish-groups-denounce-ongoing-terrorism-by-settler-e
xtremists/

In a happier world, the confluence of Passover, Ramadan and Easter would be a time of interfaith education and celebration, but this year we are seeing heightened tensions and tragic deaths of Israelis and Palestinians.  It was heartening to hear that President Biden will visit Israel in the coming months, reaffirming the United States' commitment to an equitable and secure two-state solution.  Biden accepts Israeli PM's invitation to visit Israel - Israel News - The Jerusalem Post

And as Yom HaShoah approaches, we witness the tragic escalation of brutal conflict and war crimes in Ukraine. The shocking photos of murdered civilians on the streets look like pictures from the Holocaust. We commonly translate shoah - שואה - as holocaust, from the Greek word holokaustos, meaning a ritual sacrifice that was "burnt whole." But the Hebrew word shoah simply means destruction.

In the Book of Exodus we read the riveting story of the Israelites’ escape from Egypt, complete with the ten deadly plagues that afflicted the Egyptians and the parting of the Red Sea. The people cross over to safety, Miriam leads them in celebratory dancing, and Moses leads them in singing, praising the Divine as a “man of war “ (ish ha-milchamah), a fierce Cosmic Protector. Then forty years go by, full of adventures. As the Israelites are about to enter the Land of Canaan and end their wandering, Moses gives lengthy orations reviewing communal history, ritual and ethical laws. We read:

Observe the month of Aviv [Spring] and offer a passover sacrifice to HaShem your God, for it was in the month of Aviv, at night, that HaShem your God freed you from Egypt. You shall slaughter the passover offering for HaShem your God, from the flock and the herd, in the place where HaShem will choose to establish the divine name. You shall not eat anything leavened with it. For seven days following you shall eat unleavened bread, bread of poverty—for you departed from the land of Egypt in haste—so that you may remember the day of your departure from the land of Egypt as long as you live. (Devarim 16:1-3)

After hundreds of years in Egypt, the swift departure was to be etched in collective memory. During the Pesach Seder we read from the Haggadah, “You shall tell your child on that day, saying, 'It is because of what HaShem did for me when I came out of Egypt.'" (Exodus 13:8) And we recite: “In every generation, a person is obligated to see him or herself as though s/he came forth from Egypt.” (Mishnah Pesachim 10:5) Part of the genius of the Torah text is that it sets the stage for thousands of years of ritualized participatory story-telling. 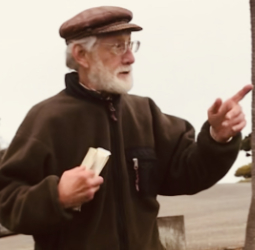 We have entered the month of Nisan which will bring us, in a little more than one week, to our first seders.

I'd like to suggest a parallel here with the time leading from Rosh HaShana to Yom Kippur.

That time also aligns with a new moon, Tishri, which begins the ten “Days of Awe,” during which we are encouraged to search ourselves for any and all evidence of ways in which we have wronged other people. When we do this search with deep intention, and when we approach those folks and ask their forgiveness and express our readiness to make amends, then we will be all the more ready to stand before HaShem on Yom Kippur itself, asking for another year of life.

That's six months from now – a full half revolution of the planet.

My Word | Leave the Holocaust out of it

We’ve been shocked by Holocaust imagery used to criticize pandemic public health measures: disgruntled Americans calling medical officials Nazis and wearing yellow stars like those forced on Holocaust victims by their killers. Recently a local Jewish business person was horrified by a blogger displaying a swastika made of hypodermic needles next to their company logo. Robert Kennedy Jr. brought his family shame suggesting that Anne Frank had more freedom than Americans today.  He didn’t mention Anne was among 6 million murdered Jews and millions of others the Nazis deemed sub-human. After an outpouring of criticism, Kennedy issued a terse apology. Similar blunders and apologies are made by numerous Republican politicians and right-wing newscasters. (Remember when the GOP stood for fiscal conservatism, not voter suppression and violence?)

Appropriating Holocaust images and names is an insidious form of Holocaust denial, implying the Nazis practiced governmental overreach, not genocide. Diminishment of the Holocaust horrors, or any persecuted people’s suffering, is an affront to human dignity.  In 2020, the Time-Standard printed a rant comparing lack of haircuts to the terrors inflicted on the Jews in Nazi Germany.

From Rabbi Naomi Steinberg - The War in Ukraine
The horrifying Russian war on Ukraine will touch the lives of everyone on earth. The planet is not so large that the effects of a conflict like this can be contained. For the worldwide Jewish community there are multiple layers of sorrow, outrage and fear. Before Shabbat I want to share a few thoughts and links with you.

Long ago when I was in high school in Concord, Massachusetts, I had the opportunity to learn some Russian and practice with my grandfather Sam who lived with us for part of the year. I followed that up with an intensive summer course and could speak well enough to enjoy long conversations in Russian with my great-uncle Alexander. I never traveled to Russia and I've forgotten most of what I knew, but a few years ago I got out my old books and brushed up my Russian so I could conduct two weddings in English, Hebrew and Russian. With my limited skills I was able to keep up conversation with the grandmothers.
Watching the heartbreaking news this week, I was deeply moved to hear Ukrainian President Volodymyr Zelensky in a remarkable speech directed to the people of Russia. Raised in a Russian-speaking region of the former Ukrainian Soviet Socialist Republic, Zelensky is fluent in both Russian and Ukrainian. With some help from the English captioning, I could understand every passionate word he uttered. The tone and bearing of this brave young leader, and hearing his speech in the language of my grandfather's generation, touched me to the core. I only recently learned that Zelensky is Jewish.
In striking contrast, in another news segment I heard Russian President Vladimir Putin announcing his "special military operation" for the purpose of the "demilitarization and de-nazification of Ukraine." I couldn't believe my ears. It sounds bad enough in English, and even worse in Russian. I had been unaware of Russia's ongoing propaganda campaign claiming that Ukraine is controlled by neo-Nazis. This would be outrageous in any circumstances, but all the more so because President Zelensky's great-grandfather and grand-uncles were murdered in the Holocaust.

Responding to a Declaration of War on Religious Freedom

Before Hanukkah I wrote my annual critique of the Maccabees and the modern myth that has grown up around them, presenting them as fighting for religious freedom. Fighters they were, and religious, but religious freedom as we understand it -- the right of the individual to practice their religion as they see fit, or not to practice any religion -- that kind of liberty was not something they could have understood, the concept being entirely outside their historical context.

Part of the myth says that the Maccabees were rebelling against Hellenism. In his fascinating book, Heritage and Hellenism (1998) esteemed scholar Erich Gruen gives us essential background: