Written records show that organized Jewish activities began in Humboldt County in the late 1940s.  The Jewish community chose the name Beth El (House of God) and elected officers in 1954. In 1960, Rabbi 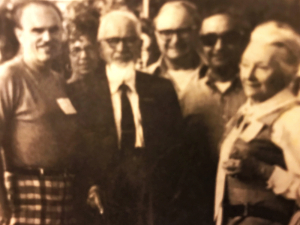 Joseph Glaser, Northwestern Regional Director of the Union of American Hebrew Congregations (UAHC) began working with us. In 1961, we affiliated with the UAHC, which put us in contact with the internationally esteemed Rabbi Leo Trepp (1913-2010).  Frequently commuting from his home in Napa, CA for Shabbat services, holidays, and life-cycle events, Rabbi Trepp officiated at the first bar mitzvah and the first Jewish wedding at our synagogue.  He continued as Temple Beth El’s spiritual leader until 1990 and is currently our Rabbi Emeritus.  Rabbi Trepp’s amazing life story from life in Germany, escaping from the Holocaust, to his rabbinic work here in the U.S. was chronicled in the 2009 German documentary, “The Last Rabbi.”

With vision, dedication and personal sacrifice, our founding members raised the money to build a mortgage-free Jewish house of worship, the first one in California north of Santa Rosa.  A number of non-Jewish local business owners generously contributed as well.  The property at the corner of Hodgson and T Streets in Eureka was purchased in May of 1964.  The groundbreaking was in 1966 and our building was completed on April 22, 1967. Rabbi Trepp presided at the dedication ceremony.  The building was extensively renovated in 2000.

Today, our synagogue honors the diverse Jewish traditions of our members by offering services that include classic Reform, Conservative, Reconstructionist, and Jewish Renewal styles. While Rabbi Steinberg leads Friday night services monthly, as well as Saturday morning Torah Services throughout the year, our members trained as Tefilah Leaders also conduct services. We also welcome visiting rabbis, Jewish educators, artists, and musicians who contribute to the cultural vitality of our community.

Our Jewish community is devoted, pluralistic, and enthusiastic.  We continue to fulfill our founding members’ dreams of being a thriving center of Jewish life in Humboldt County. We have only a part-time staff, and rely on our 125 member households to do the rest.