Temple Beth El has served the Jewish community of Humboldt County and provided a Jewish perspective in interfaith endeavors for over sixty years. Our members reflect the diversity of Humboldt County, coming from all walks of life and many different religious, cultural and ethnic backgrounds. We welcome Jewish and interfaith families and individuals, including those who are new to Jewish study and practice. We are a Welcoming Synagogue, dedicated to inclusion. Our programs are designed to meet the diverse spiritual, intellectual, and social needs of our members.  We gather to celebrate holidays, learn about our heritage, and support one another in times of joy and sorrow. We work together on social and environmental justice causes locally, statewide, nationally, and internationally. We both honor traditions and embrace innovation.

We warmly welcome visitors to our events and our website!

From the RabbiIn Talmud Bavli (Babylonian Talmud) we read:

“Adam was created alone, to teach you that anyone who destroys one soul from Israel [the Jewish people], scripture looks upon him as if he de-stroyed an entire world. And anyone who sustains one soul from Israel, scripture looks upon him as if he sustained an entire world. And [this, Ad-am’s singular creation, was for] peace among living beings, so a person will not say to his fellow: [My] father is greater than your father...Therefore, [since all humanity has one progenitor], each and every person is obligat-ed to say: The world was created for my sake.”
נִבְרָא אָדָם יְחִידִ י, לְלַמֶּדְ ךָ, שֶּכָל הַמְאַבֵּד נֶּפֶּש אַחַת מִיִשְ רָאֵּל, מַעֲלֶּה עָלָיו הַכָתוּב כְאִלּוּ אִבֵּדעוֹלָם מָלֵּא וְָָל הַמְַַיֵּם נֶּפֶּש אַחַת מִיִשְ רָאֵּל, מַעֲלֶּה עָלָיו הַכָתוּב כְאִלּוּ ִַ יֵּם עוֹלָם מָלֵּא וּמִפְנֵּי שְלוֹם הַבְרִ יוֹת, שֶּלֹּּא יֹּאמַר אָדָ ם לַחֲבֵּרוֹ אַבָא ָָדוֹל מֵּאָבִיךָ לְפִיָָךְ כָל אֶּחָד וְאֶּחָד חַיָב לוֹמַר, בִשְבִילִי נִבְרָא הָעוֹלָם
In these few lines of Talmud (Sanhedrin 4:5) we encounter some of the most inspiring and most challenging ideas in our tradition. The common descent of all humanity from one mythic ancestor is a story that should inspire unity, as all human beings are related to one another, either as members of our extended families or as very distant cousins. This is a beautiful thought, not inconsistent with the contemporary genetic evidence that we are all descended from Mitochondrial Eve. https://www.livescience.com/mitochondrial-eve-first-human-homeland.html)
As the pandemic drove us into our homes for shelter, it also has driven home the awareness of just how interconnected all 7.7 billion of us are in terms of health and happiness. The virus knows no borders, nor does climate despair that afflicts young people all over the world. As President Biden has pointed out, we are at an inflection point in human history. We have no choice but to act boldly. At first glance you might think that by saying, “The world was created for my sake,” a person would act selfishly. But the Talmud assumes that the realization of one’s own worth and the great gift of participating in this extraordinary experiment of life on earth engender a spirit of gratitude and awe to guide each of us in the right direction. This would surely lead to care for the planet and peace between people, two goals that we are learning to see as intrinsically intertwined and inseparable. Yasher koach for the wisdom of the Talmudic sages who gave us this teaching.
(read more) 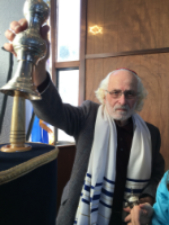