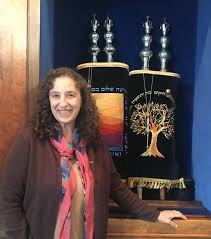 Rabbi Naomi Steinberg has been associated with Temple Beth El for over forty years, as a community participant since 1981, as a student rabbi from 1995 to 2004, and as resident rabbi since 2004. Rabbi Steinberg studied for the rabbinate independently, under the guidance of a trans-denominational panel of teachers including Rabbi Zalman Schachter-Shalomi. She received semicha, private rabbinic ordination, in 2002. Since 1995, Rabbi Steinberg also has served B’nai Ha-Aretz (Children of the Earth), the Jewish community of Southern Humboldt County and can be heard monthly KMUD radio’s “Jewish Spiritual Perspectives.”

A translator and composer, Rabbi Steinberg has arranged many of her original liturgical songs for the Temple Beth El Choir. Her children's songs are featured on “A Child’s Chanukah” with The Jewish Wedding Band on the Music For Little People label. Rabbi Steinberg collaborates with her son Berel in a storytelling and music performance piece titled, “The Angel’s Wings,” bringing to life the Rabbi’s original mystical tales.

For ten years, Rabbi Steinberg served as a lecturer in the Religious Studies Department at Humboldt State University where she taught Introduction to Judaism, Jewish Mystical Tradition, Women in Religion, and Torah and Kabbalah. She is active in interfaith work on campus and in the community.

Rabbi Steinberg and her husband Saul have resided in the rural village of Carlotta since 1981, where they raised their children. Rabbi Steinberg is a founding member of Friends of the Van Duzen River and has worked extensively on sustainable forestry issues.

Rabbi Steinberg comments: “It's a great delight to officiate at a bar or bat mitzvah for a student whom I held in my arms at his or her baby naming, or to make blessings under a wedding canopy for a student whom I called to the Torah as bar or bat mitzvah. I'm pleased that in my years as resident rabbi, I've been successful in encouraging qualified Temple members to teach classes and take strong roles in religious leadership. I'm honored to represent Temple Beth El on issues of social and environmental justice.”

Rabbi Steinberg is employed by Temple Beth El on a half-time basis. She leads a monthly Shabbat and other holiday services, officiates at life cycle events, works closely with bar and bat mitzvah students and their families, teaches classes for Adult Education and provides guidance for the Children’s Education Program.

To reach Rabbi Steinberg, please call the Temple Beth El office at 707-444-2846 or email us at rabbi@templebetheleureka.org