Temple Beth El is pleased to announce that it will be offering a reprise of its very well received Silver Anniversary Musical Celebration with Sam Reider on February 13, 2021.

Through the magic of Zoom, pianist, accordionist, and composer Sam Reider will perform solo at home on his accordion and grandfather's 100 year-old Steinway. Reider plays jazz, American folk music and his original compositions, interspersed with stories about his travels and the myriad connections between the musics and cultures of the world.

This year’s celebration will be Covid-safe.  Tickets to this event are $25.each and may be purchased here on the TBE website.  Those purchasing tickets will receive a Zoom link for the concert prior to the event.

This event is an important fundraiser for TBE, and in addition to purchasing tickets to honor Rabbi Naomi Steinberg’s 25 years with us, people are also encouraged to donate to TBE to help us through these difficult times. 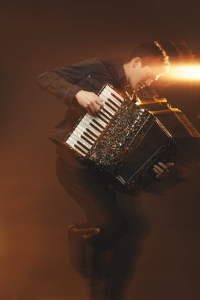 Reider has spent many years exploring and interpreting folk music from around the world on the accordion. His original compositions frequently combine jazz improvisation, folk instruments and grooves, and classical structure. As a performer, he’s been featured at Lincoln Center and on NPR and has collaborated with Grammy-nominated musical artists ranging from bluegrass mandolinist Sierra Hull, Venezuelan cuatrista Jorge Glem, and classical violinist Tessa Lark. Reider leads an ensemble of virtuosic acoustic musicians called The Human Hands and has released two records of original music under his name: “Too Hot To Sleep” and the “Human Hands EP.”

Reider grew up in San Francisco, California, in a family of creative, Jewish-American artists and musicians. He began performing at a young age, and was interviewed on Marian McPartland’s “Piano Jazz” on NPR when he graduated high school. At Columbia University, he fell in love with American roots music. While writing his senior thesis comparing the songwriting of Woody Guthrie and Ira Gershwin, Sam began studying bluegrass and old-time, transcribing the fiddle melodies for the accordion and learning to sing the songs. This set him off on a journey that has taken him from back porches and dive bars to concert halls and major festivals in practically every state in the country.

We are forutnate to be able to present him to the TBE community again, and we hope you will join us for another enchanted musical evening.